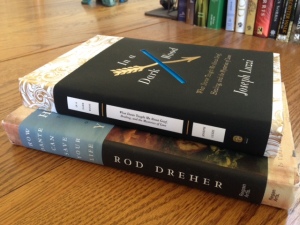 In the past few months, I’ve read two memoirs about Dante: Rod Dreher’s How Dante Can Save Your Life, which was published in April, and Joseph Luzzi’s In a Dark Wood, just published in June. I’ve included a passage from each book, both of which appear near the end and speak to the way the authors make changes in their lives, with Dante’s help.

Love is not a contractual exchange; love is given with no expectation of return. Love does not keep a ledger. (290) -Dreher

I had imagined that fatherhood meant above all sacrifice, the giving up of the things you love for the one you love, a kind of ascetic affirmation of love in self-denial. How wrong I was. There was nothing of the sense of loss implied by sacrifice. The love I now felt for my daughter was the most satisfying, self-fulfilling I had ever known. In making her needs my own, I was finally able to let go of the searing loneliness and black hole of inwardness that had seized me since Katherine’s death. Loving and taking care of Isabel had rescued me from myself–it wasn’t sacrifice; it was sanctuary. (254-255) -Luzzi